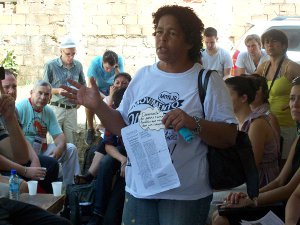 In their public presentations regarding the need for resettlement of “areas at risk” (of landslides and floods), the Mayor’s team focuses mainly on “guaranteeing safety,” and on peoples’ desire to have a roof over their heads. To their defense, unlike their predecessors, they are also paying attention to other factors, like access to transportation and jobs. That is an advance. Yet no municipal official mentions culture, community, or architecture.

Yet even in the communities “at risk,” there are many that insist on staying. In fact, the city’s public defenders successfully barred the municipal government from removing residents along a streambed in Acari favela in June. Acari suffers from the worst human development index rankings of any community in Rio, and has notoriously bad drug trafficking. Yet many residents along its streambed insist on staying despite regular floods of up to 5 meters in their homes. If people in the worst of circumstances don’t want to leave, why would residents of Vila Autódromo?

Why, despite the risk, don’t people want to leave, even if the city provides homes, access to transportation and jobs? There are 5 factors at play here:

These communities are, in essence, New Urbanist. And little attention is paid to the quality of the housing that is being demolished—unique houses designed slowly, over time, to suit individual needs of families. In the case of Vila Autódromo, the bulk of residents have successfully built high quality homes, they are in an expanding part of the city with access to jobs. They have built businesses in Vila Autodromo and neighboring communities. They know their neighbors. They do not suffer drug trafficking. 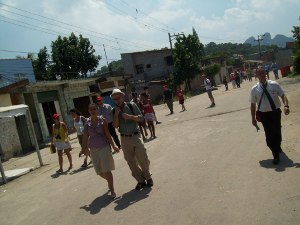 Due to a historic class rift in Rio, the “Divided City,” as it is known, between the “favelas and asphalt” as the debate here is summarized, there is no comprehension on the part of the city’s elite that what constitutes “life in the favela” is not all bad. The cultural wealth, architectural innovation, and strong sense of community in these spaces is entirely ignored when making plans to remove them. Perhaps because the “elite” parts of the city are notoriously lacking in these attributes. And their ability to participate effectively is severely underestimated.

Lula tells us that “this country deserves a chance.” The question now is what it will do with this chance. Build on the cultural wealth of this unique city—develop economically while recognizing the value of the social fabric and sense of community in the favelas, nurturing the city’s natural environment, and welcoming the cultural riches unique to its minority residents—or, as is being signaled through Paes’ actions, strengthen the market at any cost, measuring development through economic growth and crime declines alone, regardless of whether the end result is cultural sterility. If the current approach goes forward, there is a serious risk that the cultural marvels Lula declares as having attracted interest from the IOC will be commoditized by 2016.

As Lula put it in his remarks, “These Olympics are retribution to the marvelous people of Rio de Janeiro, that many times show up only in newspapers.” That’s some food for thought.

This article was written by Theresa Williamson, and published on July 30, 2010.
in #Rio2016, Policies, Violations