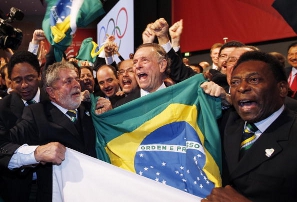 It was with anxiety and a tingle in the stomach that many Cariocas (Rio natives) glued themselves to their TV screens at 11am on October 2nd, 2009, awaiting the results of a decision that, should it be taken, was viewed as inherently transformative in determining their city’s destiny: whether or not Rio de Janeiro would host the 2016 Summer Games. Everyone was surprised when Chicago was removed in the first round. It was then Tokyo’s turn in the second. Then finally down to Madrid and Rio. The winner was announced. Rio de Janeiro!!! With a vote of 66 to Madrid’s 32!

Across Rio there were shouts and screams. A huge party sponsored by the City was thrown on Copacabana beach. It was as if we’d won the World Cup, only better. Because, unlike the Cup, which Brazil has almost grown to expect a win, and which reflects on the specific attributes associated with athletics and sportsmanship, this decision was perceived as having conquered something Brazil had never had a chance at: respect with regard to its political institutions, economy, and ability to plan and follow through. As President Lula put it moments later: “Brazil has left its 2nd class status behind and has joined the 1st class, today we received respect.” A huge step in the direction of restoring a country’s—and a city’s—battered self-esteem.

In reference to his own critics, Lula told us that “the same (people) who thought we wouldn’t have the ability to govern will be surprised with our country’s capacity to organize the Olympics.”

On Copacabana beach, in Brazil’s densest neighborhood, a relic of the past with an aging population but still representing the heart of tourism in Rio, one of Rio’s best samba schools—Salgueiro—performed live, along with MPB (Brazilian Popular Music) great, Lulu Santos. The party would happen whether or not Rio was selected. It was scheduled weeks in advance. Tens of thousands showed up, skipping work or school, and causing massive traffic jams on a work day, to witness the decision, as Cariocas like to do, collectively, in a party atmosphere.

According to Lula, this was what differentiated Brazil’s application: “The other countries presented a proposal. We presented (not only a proposal, but) the hearts, souls, and passion of the Brazilian people… I think that the souls, the way of seeing things, the warmth, the rhythm, the color, the smiles of our people are invincible… I think the world finally recognized it’s Brazil’s time.”

Also according to Lula, the other potential hosts weren’t so into it: “It was very visible on TV that Chicago and Tokyo were there just for appearance’s sake… Those who were voting saw that we had the soul, the heart. We were the only country that truly wanted the Olympics. For the others it was just one more. We had to prove our competency to host our first.”

Naturally, nowhere in his arguments as to why Rio was favored, did Lula mention a requirement of the International Olympics Committee (IOC): that a host city demonstrate there are no factions of the population in opposition to the hosting of the Games. In the case of Chicago, protests held in the city just days before the decision resulted in 6 arrests. Citizens organized NoGames, a website to share information and ideas around protesting the Games, where they now celebrate: “No Games Chicago helped turn back a bad plan for our future.” In February 2010 the American Planning Association published an article questioning “What does a city gain, or lose, by hosting the Olympics? Did Chicago lose? Or did it win?” In this article, James Korhe, Jr. writes that “unfortunately, hosting the Games gets no medals as an urban development strategy. Host efforts tend to be over promised and underfunded, and seldom achieve the goals local organizers set out.”

Of course it was not in Lula’s interest to mention that part of the reason Rio won the bid is that there was no organized opposition on the ground, because he would call attention to the fact that perhaps there should be, and because this could imply ignorance on the part of the “marvelous Brazilian people” he praised so much. In fact, there were no vocal groups organized in Rio against the Olympic bid, though there were several groups on the ground concerned with the legacy these Olympics would bring to Rio. Yet they were hopeful, as all of us are, that such an opportunity would be properly used. And thus they supported the bid.

Brazil is living an economic miracle–during the latest downturn, it has been one of few economies that have remained stable and growing. The World Bank predicts Brazil will go from 10th largest economy to 5th by 2016. Brazil is the 5th largest marketing market in the world, and growing. And Brazil has recently discovered (to the detriment of the environment) the largest offshore petroleum deposits in the world. These figures were heralded by Brazil’s Central Bank President, Henrique Meirelles, in defending Rio’s bid. 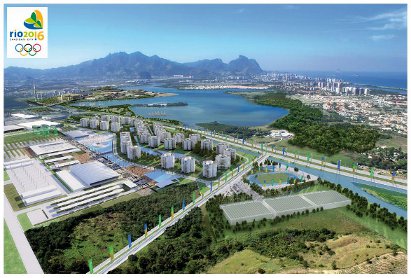 Development plans for the 2016 Olympics in Barra

Funds for Olympic development in Rio come from Brazil’s federal government: they would go elsewhere in the country if Rio were not selected for the Olympics. So, from the city’s perspective, this is an opportunity for greater investment with little expense by the city. In short, an incredible opportunity for a turn-around in a city that, in a matter of decades, lost its status as the nation’s capital to Brasilia and its industry to São Paulo. The State of Rio’s largest sources of income in recent years have been offshore oil which employs few people in the city, and pensions. The economy is starting to grow now for the first time in 30 years. Innovative approaches to education are only now being implemented.

It is because of its stagnant economy, historically low quality municipal administration, deteriorating public schools and historic conflicts between local, state and federal officials, that Rio, the size of New York, has “a murder rate 6 times higher,” a figure the media enjoy reminding us of without providing any context for. Over 100 years the number of slums, or favelas, in the city has grown from 1 (Morro da Providência, the first in Brazil) to over 1000, ranging in size from hundreds to hundreds of thousands of residents. 41% of the city’s favelas are controlled by drug gangs. Another 41% are controlled by vigilante militias often run by off duty police officers. Yet, despite their reputation, it is important to note that less than 2% of favela residents are actually involved in illicit activities.

“The 2016 Olympics: A Win For Rio?” is a five-part series by Theresa Williamson.